Andy Anderson Sartori…..musician and so much more. 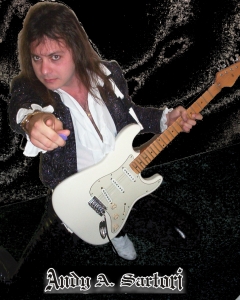 I was first introduced to Andy through ReverbNation and what I heard was amazing but what I found out about him was even more amazing. The bio on the website doesn’t tell you all of what makes Andy such a cool person. I recently got to speak with Andy and found out more. He was born in Brazil and has traveled and lived all over. Currently he is living in the US. He says he misses the big city life. Both his parents were musicians, his mother playing the piano and his father playing the acoustic guitar. Andy started playing chords at the age of 9, later taking some classes by the time he was 17 he had joined a band as was playing night clubs. During those days he played things like Black Sabbath, Led Zeppelin and others. By the time he became 20 he was playing from 8 in the morning till 10 at night. “If music is a drug, I’m addicted.” He is hungry to play as he told me.
Andy is not only a musician but composer, writer, arranger and producer. He likes his music to have a positive message. His musical roots go back to classical music. Mozart is his favorite, after that comes Vivaldi and Bach. His metal inspirations come from Deep Purple, Uriah Heep, Black Sabbath, Heaven and Hell to name just some of them. Andy explained that the likes the melodic qualities of these groups. When he listens to music he prefers vinyl over CD’s, like most rockers I know who say the sound quality is deeper from vinyl.
In his spare time he says he is an organizer but he is also a designer. Making and designing bracelets, buckles, belts and more. “It’s my hobby.” One of the other thing I was surprised by when talking with Andy was that he made his own guitars. Your passion is music why not, although one of his guitars was made by Brazilian guitar maker Leandro Copetti of Copetti Guitars .
Andy loves his fans and as he told me, they are what make you. He’s a real true person and he has a great attitude and he is personable to his fans. You can’t alienate your fans then you will have nothing he told me. It’s a privilege to be playing and doing what I love for my fans. 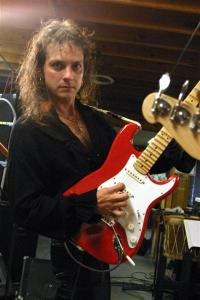 Andy and his Band are managed By Full Force Entertainment’s James McComas.
They have just finished a master version of their album, FORGED BY FIRE.
If you are into Progressive/Metal/Rock you should check it out.
Thanks again to Andy for taking the time to chat with me.

This entry was posted on November 17, 2011 by heishort. It was filed under Classical, Interview, Metal, Rock and was tagged with Andy Anderson Saroti, Copetti Guitars, Full Force Entertainment, Interview, Metal, Progressive, Rock.