Well Billy K Band is now out of the studio and they say they have some good stuff.
Billy K Band is out on the road again in Jan at Riley’s Place in OK on the 21st.
BB Black Dog will be coming to the US. They are scheduled in Denver, Mar 24 at Anomaly Con and in Jefferson, Texas on Mar 31 for The Nightmare Machines, Steampunk Festival.
Papa Juke and M.D. Friedman will be playing in Loveland tonight, Longmont tomorrow and Aurora and Arvada, Co the rest of this month. Check ReverbNations for places and times.
Broken Tongues will be at the Gothic Theatre in Englewood on Feb. 10th and Oak Tavern, Denver Co. on Feb. 24th.
Phil Lesh & Friends at the 1st Bank Center, Co. on Feb. 16th.
Radiohead is already Sold Out for March at the 1st Bank Center.

This group has listed itself as Alternative/Psychedelic/Stoner/SteamPunk as well as Progressive/Rock, what you can say about them is they have a style that is fun and innovative. Dale Rowles was kind enough to give me a little information about the group.

How did you get started, little history bio basically?
Well, not an easy question really, BB BlackDog formed completely by Accident, as with most things that happen to us, I was selling musical instruments for a living, and met a Guitar
builder (Stefan Becker) at a party in Germany, he had been given some studio time by a friend for his Birthday, and said it would be funny to try and make some songs, with just 2
bass and drums, so we found a session drummer, wrote 6 songs in 3 days and recorded them in 2, I thought nothing more of it, until a phone call from Germany, saying they had been
put on the net, people loved them, and we’d better find a Full time Drummer and record more, so Enter “Axel Boldt” (Chief Engineear Axel Boldt) 6’9″ giant of a German Drummer.
We went back to the studio, recorded 2 Albums worth of Material, and booked our first Tour, back in June 2007.
Stefan Left due to other commitments in 2010, replaced By John Ferguson (Baron von Gimphausen). Plus Myself Dale Rowles on the higher bass and vocals.

What or who inspired you?
At the moment the Steampunk Community, We never actually set out to be anything, just write and play songs we like, but were adopted by the steampunk community, mostly after John joined, due to our stage outfits, but since then, we’ve embraced it fully, as it just suits us perfectly. Must be said that without Jack Bruce, Geezer Butler, Geddy Lee, and Chris Squire I wouldn’t have been a bass player.

What instruments do you play and who manufactured them?
We’ve 2 full sets of Kit, but got everything down to a little over 2 flight cases each.
John Plays a Custom Built 5 String Beckergittarrenbau Bass, or a 5 string Stingray Bass we’ve fiddled with a bit.
Axel Plays a Custom Yamaha Drum Kit in Sparkly pink, or a Kit he built himself from Ikea Plant pots !
I play a Rickenbacker 4001, Bass from 1974, without a neck pickup and extended to 24 frets with a crybaby wha and boss blues driver, or a custom built Beckergittarrenbau 4 string bass with built in overdrive and a crybaby wha, Honer Marine Band Harmonica and an AKG D5 Mike.
We also get a bose L1 and 4 B1’s plus a mixer and mikes etc in the 2 box’s, so self contained in 2 flight cases including drums.

What do you listen too?
Quite varied, Axel like’s funk, Prince, grand master Flash and the like, as well as metal and rock, John is a big Pink Floyd and Jazz fan, but he’s very knowledgeable across the board, As for my influences, I grew up in the 70’s so progressed from T Rex and Bowie into Black Sabbath, and Deep purple, the psychedelic Rock scene, then Punk, but I’m quite varied in my listening now, I suppose it all comes through.

What makes you happy? sad?
My Girlfriend would say its whether Derby county win or not, but I think apart from the clichés its when I’m playing that I’m happiest, there’s a lot things I see in this world I’m sad about, but I try and only think about the ones I can do something about, the rest I probably moan about in songs.

What do you like to do in your spare time?
What’s that ?

If you could do anything you wanted what would it be?
Pretty much doing it. like to be playing and writing more, but its a reality booking, promo, web sites, labels and the like take more of my time, we’ve a lot of help from some great friends and fans now, but it’s still a full time job organising everything.

Anything else you think people don’t already know about you that you want to share?
We’re 2 bass players, and a drummer, 2 English and a German, with a love of the Steampunk style and philosophy, just trying to make some original honest music, what you get on the recordings is what you get live, we don’t overdub, use click tracks, or Auto tune, just mike everything up and play, of course there’s delay and reverb etc on the recordings, as well as being mixed and mastered but nothing we can’t do live simply and quickly.
3 Simple Men playing simple and hopefully entertaining/humorous music. (we do have dancers, of Burlesque and belly dance in nature, with us at many of our shows, but nothing to graphic, just suggestive, we are Steampunks after all ! ) 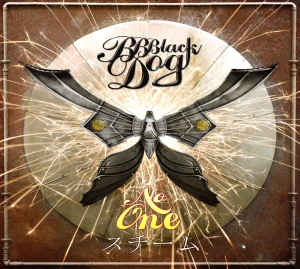 Have you got another album in the works and/or music videos?
We’ve already recorded the Next Album, artwork on the way, this one is with a 24 page comic book featuring the Band, hopefully out in March.
Actually made a few Music Video’s, latest of which is at, always have a lot of fun, most of them directed and edited at least by Mika Reshoft, our friend from Germany
http://blip.tv/bbblackdog/what-you-need-by-bb-blackdog-5842160
We’ve also made a full feature film “Steal the show” out on DVD with a couple of live concerts as bonus.

Could you tell me a little about your manager and label.
Well, we manage ourselves.
We’ve our own label “Whitedog records” and our own webshop “www.steampunkrecords.com”
While I’m doing the cheeky plugs, www.bbblackdog.eu and www.facebook.com/bbblackdog for Gigs and info
Thanks a Lot, its appreciated, Cheers Dale Rowles.

You can also find them at MySpace and YouTube.
And Thank you Dale.