Lark Vs. Owl…..I forgot to ask who was the Lark or Owl.

Lark Vs. Owl…Interesting name for a rock/doom/pop group, and they proved to me to be a very interesting band.
This Seattle based band is part of the Wandering Infinity Production Label.
Dennis told me a little bit about them. 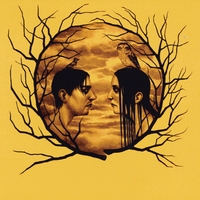 Could you give me a little background?
Were caged pets for a band called Yam in early to mid-00’s. During/after Yam’s demise, adopted by instrumental hip-hop group, starkiller. in 2006, flew the coop and formed Lark vs. Owl, first CD year or so later. Quick migration with Uneasy 2008-2010, but back to old feeding grounds, working on new CD 2012.
What or who inspired you?
Birds of a different feather but liked each others’ side bands (Matt Supernauty, Dennis AJBBV) and said flock it! Also Quasi’s “Including Birds” or something like that; simple/not-so-simple 2-piece band (at the time) said anything’s possible.
What instruments do you play?
Dennis bass/guitar/ukelele/vocals, Matt vocals/drums/keyboards/gong/whistles and kazoo.
What do you listen too?
Like any good songbirds we listen to too much. Wanna reinterpret old folk or John Lee Hooker-style blues but end up just covering the Ramones or Radiohead.
What makes you happy? or sad?
Happy: the courage to fly musically naked (musically only) in front of an audience. Sad: Dealing with Rubber Chickens aka: people truly faking it to make it.
What do you like to do in your spare time?
Try to sleep in between reading scraps of nesting paper (Matt-Salman Rushdie jag, Dennis-NW History books).
. If you could do anything you wanted what would it be?
Continue to fly musically naked (again, musically only) in front of larger audiences, perhaps naked audiences.
If you couldn’t tell these guys are hoot, bad pun.
You can hear them and see them at on the web at these locations. Thanks again guys for sharing with us.
MySpace
ReverbNation
Facebook
Vimeo

European bands as I mentioned before are part of the SingStar fun. For us here in the US alot of them may be unknown, and for those of us that play we are getting a wider look at the groups over there.
Dead by April, according to some they are Alternative Metal or Melodic Death Metal. From Sweden this band first hit the scene in May of 2009 with their debut self-titled album.

Jimmie Strimell does screaming vocals as well as clean vocals and also sings for Death Destruction and in the past Nightrage.
Zandro Santiago also vocals.
Marcus Wesslén plays Bass guitar.
Alex Svenningsson plays the drums.
Session and Touring Members: Pontus Hjelm, guitars, keyboards, backing vocals and songwriter for the band. Joel Nilsson plays guitars along with Jonas Ekdahl.
The song released for play on Sing Star is “Losing You” which you can see on their YouTube site. Their most recent album “Incomparable” was released in Sept. 2011.
The other band we are spotlighting is Sunrise Avenue. This European band hails from Finland forming in 1992. They have released 4 albums “Out of Style” is the most recent released 2011. One of the songs from this album featured on SingStar is “Not Again” along with 7 other songs form their previous albums. Their newest video is “Somebody Help Me“.
Te band is made up of Samu Haber who is the lead vocalist and guitar player.

Raul Ruutu plays the bass guitar.
Sami Osala is their drummer.
Riku Rajamaa also plays guitar.
This group falls into the alternative rock, pop rock and soft rock. Here is the link to their website which is in English.
Keep on discovering music.

Brian Mackey, I know some of you haven’t heard of him before, but I’m hoping to change that.
He lists his music as Indie/Pop/Rock. You can find a number of stories about him by checking out his MySpace, ReverbNation or Facebook.
Lucky for me I asked him if he would come to Colorado and play, and he asked back where would be good.
I gave him some places to check out and then asked him if he wouldn’t mind giving me a small interview with some information you couldn’t find just anywhere on him.
So I asked him what instruments do you play and who is the manufacturer?
Instruments I play:
Acousitc Guitar – Martin
Electric Guitar – Fender
Bass – Fender
Piano – Hallet Davis & Co Upright Piano for writing
Piano Recording – M-Audio Keyboard
What music do you like to listen to?
Classical music, Beethoven, Mozart, Chopin
I also like any kind of music really, anything that makes me think or feel.
My most recent great find is George Fromby from the 1930s and 40s he was from the UK.
He did some really cool offbeat singer/songwriter storytelling that makes me smile..
What makes you happy?
Eating, writing, staying up way too late, sleeping way too late, Flying my kite, Pretending like I’m from the cast of a Dickens Novel, and drinking..
What’s do like to do in your spare time?
Hang out with friends, write, eat, play shows.
Tell me a few things that not everyone knows about you?
I had a 140 IQ in 5th grade, so I’m sort of smart I guess, or maybe I’m just a smart ass, or just remove the word smart… 🙂

I want to be a pilot.

I was told I’m a good graphic designer, I’ve had no education on the subject, or really much education to speak of, but I read alot and I do know what I like,
and sometimes I’ve helped people design certain things, and I’ll help people that went to school for it and they ask, “Where did you go to school?” and I’ll lie and say, “Cal Arts” just because I like the way it sounds.
Thanks Brain for the interview, please check out his video on YouTube “Honest Love”.